Dr. Farley Yang moved to Arizona from Chicago in 1999. He received his undergraduate and medical degrees at the University of Michigan where he developed his interest in cancer biology and patient care. 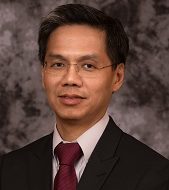 Dr. Farley Yang moved to Arizona from Chicago in 1999. He has worked in Scottsdale and Phoenix specializing in a number of disease sites including breast cancers, head and neck cancers, prostate cancers, lung cancers, gynecological cancers and lymphoma. He received his undergraduate and medical degrees at the University of Michigan where he developed his interest in cancer biology and patient care.

During his time in Chicago, he published on a number of cancer subjects including the treatment of prostate cancer, lymphomas, and 3D conformal radiation treatments.

Since arriving in Arizona, Dr. Yang has embraced the latest technologies in the treatment of some of the most difficult oncology cases. He was one of the first radiation oncologists in Arizona to use Intensity Modulated Radiation Therapy (IMRT)–a more precise way of shaping the beams of radiation to conform to the target disease–in the treatment of head and neck cancers with great success. He is proud of the large number of head and neck patients that continue to follow up with him for many years. In addition, many of his patients have benefited from Stereotactic Radiosurgery (SRS) procedures for both brain and body tumors (particularly lung cancer), which is able to deliver high doses of pin-point radiation to small cancers in less than one week. In addition, Dr. Yang has many years of experience with High Dose Rate (HDR) brachytherapy for implantable malignancies, which allows high doses of radioactive material to be temporarily placed next to the cancer while minimizing dose to the surrounding organs.

Although adopting advanced technology has played an important role in developing his practice in Arizona, Dr. Yang believes strongly that educating the patients and their families is the first step towards a successful outcome. Time and patience for those in need is an essential component in his treatment of cancer patients.

Dr. Yang is Board Certified in Radiation Oncology by the American Board of Radiology. He has also earned the “Top Doc” recognition for Radiation Oncology in the 2010 and 2011 Phoenix Magazine “Top Doc” issue. Physicians selected for this recognition are selected through a peer-review survey. The theory is that medical professionals are best qualified to judge medical professionals. To select the physicians, PHOENIX magazine randomly surveys 5,000 Valley physicians, including M.D.s (medical doctors), D.O.s (osteopathic doctors) and N.D.s/N.M.Ds (naturopathic doctors). The surveys ask the doctors to nominate other doctors who, in their judgment, are the best in their field and related fields. Congratulations Dr. Yang!