There are three categories of treatment for breast cancer: surgery, radiation therapy, and drug therapy. Each of these tools has a different role.

Different types of operations that may be used for breast cancer are listed below. A given patient will have some but not all of these surgeries.

Lumpectomy: removal of the cancerous lump only, also known as partial mastectomy

Mastectomy: complete removal of the breast

Sentinel lymph node surgery: removal of one or a few lymph nodes from the armpit area

Axillary dissection: removal of many lymph nodes from the armpit area 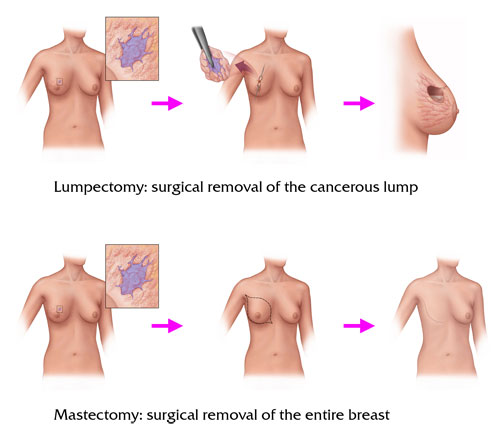 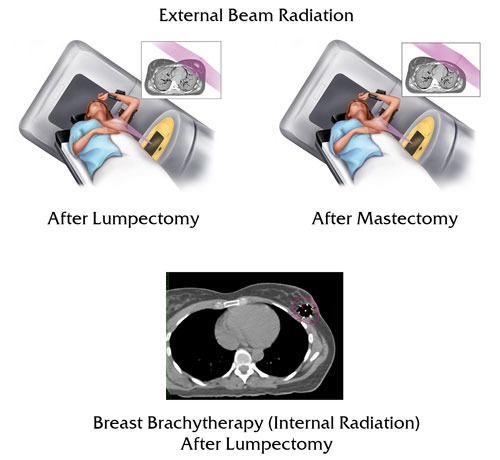 Most radiation therapy treatments for breast cancer fall into one of four categories:

These drugs can be effective against breast cancers that are stimulated by estrogen, a female hormone. Cancers stimulated by estrogen are described as ‘estrogen-receptor positive,’ usually abbreviated as ‘ER positive.’ Estrogen-blocking drugs are usually given for many years. Most are taken as a pill. Commonly used examples are tamoxifen and anastrazole.

These are powerful drugs. Many are synthetic versions of plant and animal toxins. They can be very effective but may cause more side effects. These side effects are generally tolerable and temporary. Chemotherapy is given for several months, and the drugs may be given by vein or in pill form. Some chemotherapy drugs include cyclophosphamide, taxotere, doxorubicin, and carboplatin. Usually two or three are used in combination. A combination is abbreviated using the first letter of each drug. For example, taxotere and carboplatin used together is referred to as TC.

These drugs attack specific proteins present in some (but not all) breast cancers. The concept is like having the right key for a certain lock. The Targeted Therapy drug is the ‘key.’ Some breast cancers have the ‘lock’ but others do not. These drugs may be given with chemotherapy or as stand-alone treatment. Examples include trastuzumab and lapatinib.

When and How Are These Drugs Used.

Some patients do not receive drug therapy, because there is little or no concern that invisibly small amounts of cancer are left behind after surgery or radiation. Other patients may be offered an estrogen-blocking drug alone, chemotherapy alone, or some combination of two (or all three) types of drug therapy. Many things factor into the doctor’s decision to recommend one drug or another.

A common patient question is “Do I need chemotherapy?” An honest explanation will always be more complicated than a simple ‘Yes’ or ‘No’ reply. The decision to use any drug is based on balancing the benefits of drug therapy against the risks (side effects) of such therapy. Consultation with a skilled specialist (a medical oncologist) is very important.

What is Early Stage Breast Cancer?

Surgery is very important for breast cancer. It is usually the first treatment for breast cancer, with radiation therapy or drug therapy added afterwards in some patients. For many decades, only one operation was available: mastectomy. Mastectomy is complete surgical removal of the breast. This worked quite well in eliminating the cancer, but is disfiguring; the breast is removed and a long scar runs across the woman’s chest in its place. Some doctors thought this was over-treatment for small breast cancers and they experimented with a technique called lumpectomy.
Lumpectomy is a much simpler procedure, which removes only the cancerous lump itself; much less of the normal breast is removed, and the breast often looks almost normal after the procedure except for a small scar. Other descriptions for lumpectomy include partial mastectomy, segmental mastectomy, and tylectomy. These words all mean essentially the same thing as lumpectomy. Several trials (experiments) were done comparing lumpectomy to mastectomy. Lumpectomy by itself did not work well because more than one-third of cancers grew back in the breast around the lumpectomy area. This is called a local recurrence because the cancer recurs in the part of the breast where the original cancer first appeared.
Why did some of these cancers re-grow in the breast? The reason is that lumpectomy left behind invisibly small amounts of cancer. Cancers do not grow as smooth round balls. Cancers can have long tiny tendrils that stretch away from the visible lump. When the surgeon removes the lump, he or she cannot see these invisibly small pieces of cancer which may be left behind. This invisibly small residual cancer would grow back over the next few years and cause a local recurrence. The only way to surgically remove these small amounts of residual cancer after lumpectomy is to do a mastectomy.
Because of this problem with local recurrence doctors concluded that lumpectomy alone was not enough. Around this same time, radiation therapy became widely available and doctors learned that radiation was effective in safely eliminating small amounts of cancer from the body. Doctors then tested whether radiation could eliminate the small amounts of cancer left in the breast after lumpectomy.
Many very large trials (experiments) were performed worldwide. These trials proved that the combination of lumpectomy and radiation was just as effective as mastectomy for early breast cancer; the cure rate was the same for women undergoing lumpectomy and radiation as it was for those choosing initial mastectomy.
This combination of lumpectomy and radiation is often referred to as breast conservation because it effectively treats the cancer, but permits a woman to preserve her breast.

Our physicians were early strong advocates for breast conservation therapy. In St. Louis, Dr. Kuske was a leader in elevating the breast conservation rates from a mere 15% to over 50% during his 7-year tenure at Washington University and Barnes Hospital.

In Phoenix, Dr. Quiet and her surgical colleagues wiped-out the national reputation of the Valley as being the “bilateral mastectomy capitol of the world.” In the 1980s and early 1990s, the standard treatment included whole breast radiation, many times with an extra radiation dose to the site at greatest risk for recurrence to the lumpectomy site. Because a large volume of tissue was included in the radiation field, a light dose of radiation was delivered daily, allowing normal tissues to repair after each dose. The typical regimen lasted 6-7 weeks, and the cumulative dose was enough to eliminate cancer cells in the breast.
Even when you need conventional raditaion, who you go to matters! Radiation Oncology is a skill-dependent field of medicine, like surgery. All of us at ABCs firmly believe that your care is better with sub-specialists devoted to breast cancer, rather than someone who treats lung, prostate, brain, rectal, and all other cancers on a day-to-day basis.

What Your Surgeon is Telling You

Surgery is a key part of any curative treatment for breast cancer. There are three types of surgery a woman with breast cancer might undergo as part of the treatment for the cancer. These are mastectomy (with or without breast reconstruction), lumpectomy, and surgery to examine the lymph nodes in the armpit area.

A mastectomy is complete surgical removal of the breast. It was the first effective surgery for breast cancer. Mastectomy remains a common treatment for breast cancer. After a mastectomy a woman can undergo breast reconstruction surgery (plastic surgery) to re-create a breast. The option of breast reconstruction has made mastectomy more acceptable to some women.
A lumpectomy is removal of the cancerous lump only, leaving the rest of the breast intact. Lumpectomy should be combined with radiation therapy if a woman wants the best cure rate for her cancer. The combination of lumpectomy and radiation is often referred to as breast conservation. Breast conservation offers patients with early breast cancer the same cure rate as mastectomy. This treatment is discussed in more detail below.
Surgery to remove and examine lymph nodes from the armpit area is usually performed at the same time as mastectomy or lumpectomy. This surgery has two goals. The first is to determine if cancer has spread to the lymph nodes in the armpit area. Lymph nodes are small glands which filter cancer cells. The armpit area is called the axilla and its lymph nodes are called axillary lymph nodes. If cancer cells are found in the axillary lymph nodes it means the cancer is more aggressive, and more treatment after surgery – often drug therapy like chemotherapy or hormonal drugs is usually recommended. Examining these lymph nodes for cancer can be very important in determining which women will be offered drug therapy after surgery.

But almost all doctors now agree that patients without cancer in the sentinel lymph nodes do not need axillary dissection. This is because such patients almost never have axillary recurrence, and even when it does occur it can be controlled with surgery later.

This is very good news for patients because it means that most women with early stage breast cancer those without cancer in the sentinel lymph nodes – can have a sentinel node surgery and avoid axillary dissection and its side effects, without compromising their treatment.

At our Gilbert Office, Arizona Breast Cancer Specialists is proud to be the first center in the Southwest to offer patients the TrueBeam STx, an advanced radiosurgery system from Varian Medical Systems. It was engineered from its inception to perform noninvasive, image-guided procedures with pinpoint accuracy and precision. It works by choreographing highly sophisticated imaging, treatment delivery and motion management technologies making it possible to deliver treatments more quickly while compensating for tumor motion. This opens the door to new possibilities for the treatment of challenging cancers throughout the body including those in the breast.

How does radiosurgery with TrueBeam work?

Radiosurgery is an effective treatment for many different types of cancer including breast cancer. It uses sophisticated technology to deliver very precise and accurate beams of radiation to a breast tumor while minimizing exposure to nearby healthy tissue.

Our physicians may prescribe treatment with TrueBeam STx for many reasons. It can deliver treatments up to 50 percent faster with a dose delivery rate of up to 2400 monitor units per minute, double the maximum output of earlier, industry-leading systems. This makes it possible to offer greater patient comfort by shortening treatments and to improve precision by leaving less time for tumor motion during dose delivery.

The treatment beam is generated by a machine called a medical linear accelerator. This machine shapes beams of energy with varying intensities generated by the machine.

The treatment beam can be aimed at a tumor from multiple angles to hit the target in a complete three-dimensional manner. In fact, TrueBeam STx's treatment beam can be delivered with submillimeter accuracy and varying intensity. The idea is to deliver the lowest dose possible to the surrounding healthy tissue, while still delivering the maximum dose to the tumor.
If you are being treated at the Gilbert ABCS Office, be sure to ask your physician if TrueBeam STx is right for you.